Home 5 About Us 5 History

A Brief History of the Company. 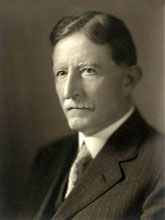 In 1892, Washington, D.C. was a small Southern community of less than 30,000 people. Although it played host to the Federal government, Congress was in session only four or five months a year. When it adjourned, the city virtually shut down. On December 1, 1892, B. Francis Saul opened the doors of the Saul Company. He was 19 years old. His father, John Saul, who had died a few years earlier, was a native of County Cork, Ireland, a distinguished horticulturist. At the request of Andrew Jackson Downing, the renowned Capital landscape architect, John Saul had left Ireland for Washington in May of 1851 to take over the planning and development of the Mall and other public areas in the emerging capital city. In 1854, John Saul became the first Chairman of Washington’s Parks commission, the forerunner of the Park and Planning Commission for the city.

For many years, John Saul maintained two botanical nurseries in Washington, D.C. By 1892, a young growing Washington, D.C. had reached the borders of these nurseries, and B. F. Saul founded his real estate business to facilitate their sale. Disposition of the land on a retail lot basis would bring higher prices than could otherwise be realized. To expedite the sales of lots, he took back notes from the buyers. His success in reselling these notes to the public was the beginning and indeed, the foundation for the growth of his firm as a mortgage bank. This practice continued, with the buying of land for the company and its clients and the subsequent sale to builders for development. B. F. Saul Company financed each stage of the transaction, in the process that was to be repeated many times over.

Those mortgage bankers who were sound and well-capitalized flourished during the early decades of the 20th century. Many of them, like B. F. Saul Company, developed expertise in property management, leasing, development, insurance and related activities. The Crash of 1929 and the ensuing Depression took a heavy toll on both commercial banks and mortgage bankers, and many did not survive. During this turmoil, B. F. Saul was not only in a sound financial position but was by far the largest company of its kind in Washington.

After the B. F. Saul Company became well established in the community, B. F. Saul, at the age of 27, founded the Home Savings Bank, which rapidly became the leading retail bank in the City. In 1919, he merged it with the American Security and Trust Company. In 1969 B. F. Saul II founded Chevy Chase Bank, which flourished for 40 years. Chevy Chase Bank was acquired by Capital One in 2009.

Today the B. F. Saul Company concentrates on the ownership, development and construction of real estate. It also has large property management, leasing and insurance departments. The Saul Company has a large hotel division, which owns and manages 19 business class hotels with 3,437 rooms. In addition the company owns The Hay-Adams, this luxury property is recognized as one of The Leading Hotels of the World. The Saul Company owns and manages a portfolio of office buildings, office parks, shopping centers and apartments.

In the early 1990’s the Saul Company started Saul Centers, a New York Stock Exchange listed REIT, which invests primarily in shopping centers and commercial buildings. It is considered one of the most successful REITs of its kind in the country. The B. F. Saul Company continues today with the third and fourth generation of the family involved in leading the company, using the same fundamental values of its founder and concentrating on conservative business practices, the highest ethical standards and forward looking management.

Click on the adjacent links to learn more about B.F. Saul Company.

We won't track your information when you visit our site. But in order to comply with your preferences, we will use a small cookie so that you're not asked to make this choice again.

This website uses cookies to improve your experience while you navigate through the website. Out of these, the cookies that are categorized as necessary are stored on your browser as they are essential for the working of basic functionalities of the website. We also use third-party cookies that help us analyze and understand how you use this website. These cookies will be stored in your browser only with your consent. You also have the option to opt-out of these cookies. But opting out of some of these cookies may affect your browsing experience.
Necessary Always Enabled
Necessary cookies are absolutely essential for the website to function properly. These cookies ensure basic functionalities and security features of the website, anonymously.
Functional
Functional cookies help to perform certain functionalities like sharing the content of the website on social media platforms, collect feedbacks, and other third-party features.
Performance
Performance cookies are used to understand and analyze the key performance indexes of the website which helps in delivering a better user experience for the visitors.
Analytics
Analytical cookies are used to understand how visitors interact with the website. These cookies help provide information on metrics the number of visitors, bounce rate, traffic source, etc.
SAVE & ACCEPT