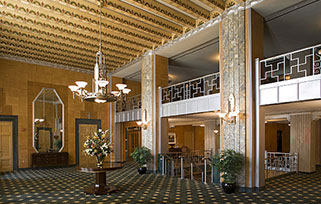 Since 1931, The B.F. Saul Company has been engaged in the acquisition, renovation, construction and management of residential property in the Washington Metropolitan Area. The Kennedy-Warren, which is the most famous property in the portfolio, is known for its art deco architecture and notable tenants. In 1989, Kennedy-Warren Apartment Building became a District of Columbia Historic Landmark and five years later, was added to the National Register of Historic Places. In 2004, construction of the ultra-luxury Kennedy-Warren South Wing was completed featuring “Grand Apartment” homes with unique features such as semi-private elevators entrances.

In 2010, construction of Lyon Place at Clarendon Center located in Arlington, VA was complete and reached stabilization within 4 months. Lyon Place at Clarendon Center received the 2012 National Homebuilder’s Pillars Award for Best High-rise in the industry. Additional residential properties are in the pipeline for the District of Columbia and Maryland.